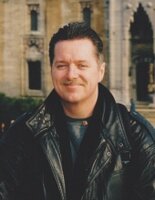 On Tuesday, January 5th, 2021, Major (Retired) Brian C. Nelson, CD of Wainwright, AB passed away from COVID-19 in the Mazankowski Heart Institute at the UofA Hospital in Edmonton. Brian will be greatly missed by his wife Janis, his children Geordie & Chloe, his brothers Scott (Anna) & David (Phelomina), his brother in-law Fred Bloom (Dina O’Meara), his sister in-law Lisa (Michael) Gaunt, his nieces and nephews Rebecca Bloom-Geddes (Glen Geddes), Andrew (Tugce) Nelson, Breton (Brandy) Gaunt, Sterling Nelson, Alix (Tom) Kelly, Cameron Nelson, and Connor Nelson, as well as his many cousins and relatives. Brian was pre-deceased by his parents Joyce & Bruce Nelson, his sister Laurie Nelson-Bloom and his father in-law & mother in-law John & Daphne Panton. Brian was born January 30th, 1964 in New Glasgow, NS. He was the youngest of four and spent his early years in Truro & Bible Hill, NS and often spoke fondly of his memories growing up on Ryland Avenue. Brian always smiled when someone asked where he was from because his family moved across Canada many times (including Leduc, Bolton, and Calgary); though he always said Alberta felt like home. After high school, Brian attended Prairie Bible Institute and went on to finish his degree in Calgary, where he met his wife. Continuing with his tradition of moving frequently, Brian was posted to St. Catharines, ON, where both of his children were born. Then after another short time in Calgary, he moved to Ottawa where his young family created many fond memories together. His last posting brought the family back to Alberta again, where they settled in Wainwright. Brian was very proud of his military service; he often spoke of the summers he taught sailing with cadets. After graduating high school, he joined the Calgary Highlanders and was later commissioned as a reserve force officer. In 1989 Brian was then commissioned as a regular force officer in the Princess Patricia’s Canadian Light Infantry. In 2009 Brian retired from the military and joined the public service. Most recently, he enjoyed his work as a manager with the Canadian Forces Housing Agency. Brian lived life passionately; his many interests included his heritage, his family, and the many friendships he built throughout his adventures. Brian sought to build beauty into this world and was known for the magnificent gardens he created in every home he lived in and the many trees he planted along the way. Brian connected with people over his love of history, politics, travel, and good food. He always gave back to the communities where he lived by volunteering his time, energy, and enthusiasm. He was deeply involved in his church and his relationship with Jesus Christ was the cornerstone of the values that guided his life. A private family service will take place on Saturday January 16th, 2021 at 1pm MST; family and friends wishing to participate may do so virtually via the webcast link below the photo or under the photos and video tab above At the Mazankowski Heart Institute, Brian received critical-care interventions that prolonged his life, giving him a fighting chance. If so desired, donations in memory of Brian can be made to the University Hospital Foundation, specified to the Cardio-Vascular Intensive Care Unit (CVICU) in the Mazankowski Heart Institute