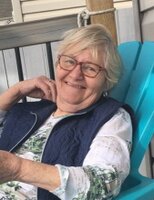 On Wednesday, September 15, 2021 Mrs. Dianna Lomheim of Wainwright, Alberta passed away at her home at the age of 73 years. Dianna is survived by her three children, Wade (Lori Robbins) Lomheim of Daysland, Alberta, Clint (Courtney) Lomheim of Tofield, Alberta, Reanna Lomheim of Edmonton, Alberta; three grandchildren, Reagan, Makenna, and Jace; brother, Daryl Olir of Peace River, Alberta; brother in-law, Clarence (Pat) Lomheim of Calgary, Alberta; as well as nieces, nephews, extended family and dear friends. She was predeceased by her husband, Rodney Lomheim in December of 2020. A funeral service honouring both Dianna and Rodney will be conducted Sunday, September 19, 2021 from Creech’s Funeral Chapel, Wainwright, Alberta at 11:00 AM Interment will take place at a later date in Stavely, Alberta. If so desired, the family suggests memorial contributions be made to the Alberta Cancer Foundation or to the SPCA.